for ears un-deaf, but yet not hearing;

for eyes un-blind, but yet not seeing.

once we sought the intentions of gods in nature

in the intestines of fowls, in phenomena we couldn’t control,

when gods have lost their voices, and we still have no control

not of nature, not of ourselves, not of what we inflict on nature:

where is your voice, nature?

where is my voice, can you hear it?

if I speak loudly, form my lips like someone

making herself understood in a storm at sea:

will you respond, nature?

close to my ear. I will listen. I will try.

The oldest traces of the Chinese language are found on so-called oracle bones, pieces of bone or turtle shell that were used for divination. Questions to the gods were inscribed on the bones in oracle bone script. When heated, the oracle bones would crack, and from the patterns shaped this way, a written response from the gods was interpreted by the diviner. The gods had spoken, or rather, responded in writing.

The Chinese reading of oracle bones is the first thing that strikes my mind when exploring the collaborative project Surface Tension by artists Fält & Fusco at the eastern Finnish city Kuopio’s one and only artists’ run gallery space Ars Libera.

Emma Fält travelled to Varangerfjord far up in the north of Norway, a deep inlet (not an actual fjord) facing the Barents Sea on top of the Eurasian continent. Samí culture has existed here as long as we have literary sources, over time co-inhabiting the area with Norwegians and Finns arriving from the south. People have lived here under extreme climatic conditions; no doubt they tried to read and interpret a nature that constantly challenged their survival skills. There is a constant flow of information in nature, some of it temporary and ephemeral, other information has its cause in physical actions that leave remaining marks. Linguists and archeologists explore human languages and traces of habitation; but who explores the information transmitted by other living creatures, atmospheric sensations and dead objects?

Fält & Fusco’s collaboration is based on processes of interpretation and translation. Fält started the project by researching what she considers non-verbal languages during her field studies in Varangerfjord: during repeated walks along the shoreline of Vadsø town. She registered patterns and movements of the sea, rocks and other factors on photographs, video or paper. These processes also extended into a form of black and white prints made in the technique of paper marbling. 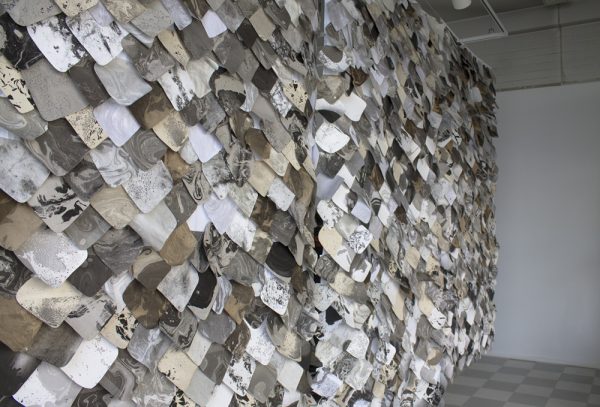 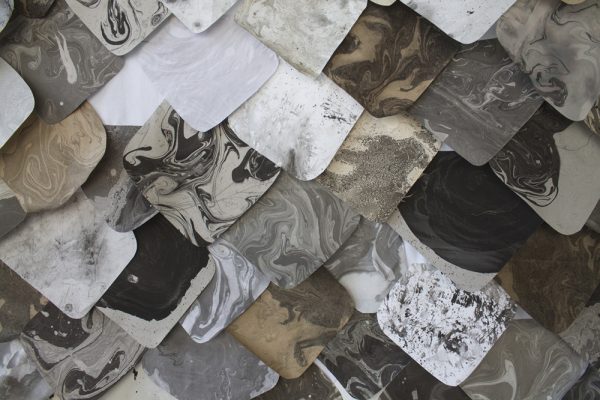 In the gallery space of Ars Libera, a wall is formed by hanging “drapes” of these small paper squares, overlapping each other, all attached to the hanging screen from a corner of the papers. Behind this screen you meet the actual results of the tight dialogue between Emma Fält and Roberto Fusco. Five hanging paper columns are formed by large drawings rolled as tubes. Recordings of environmental sounds are heard, and of texts being read by a female voice. A singular screen on a wall show the transformation of images that have turned into vortexes of points; gathering, spreading and dissolving like swarms of insects. A set of two flat screens follow the transformation of waves caught on video, at some point forming spiraling tubes, at other reminding of computer renderings of sound waves. 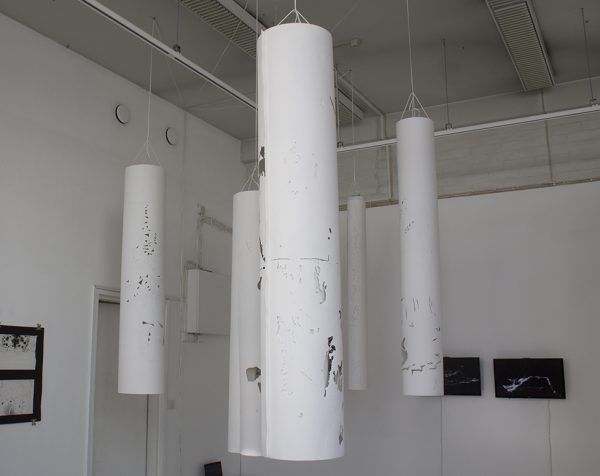 Roberto Fusco has digitally interpreted the photos and videos by Emma Fält, using computer programs to extract new images and motions from the information. We have few or no traces of the original images to cling on to, what we see is only the interpretation. It is a way of working that reminds of Gustav Metzger’s experiments with auto-creative processes in the 1960s, among them liquid crystal projections – or other artist’s practices where various forms of random processes are allowed to, to some degree or totally, decide the aesthetic outcome.

In a second stage of (re-)translation, five computer images made by Fusco, based on Fält’s photographs, are (re-)used by Fält as the basis for large scale drawings, that are now the tubes hanging from the ceiling. The drawings are a form of abstractions, mostly consisting of ppoints, but also allowing Fält to improvise. There is a lot of this sort of recirculation of the same basic information in their project, forming a sort of aesthetic of exchange. It’s as if the transitory moments are – even when absent – of equal importance to what we see. In that sense, the work is just as much conceptual as it is material, and a matter of process even more than a matter of end result.

Downstairs in the gallery, a simple device drops liquid on a film with ink and chemicals. The marbling effect created is filmed by a video camera and projected onto a wall. In this way the exhibition closes a circuit, as it started with the marbled paper works in the hanging screen upstairs. 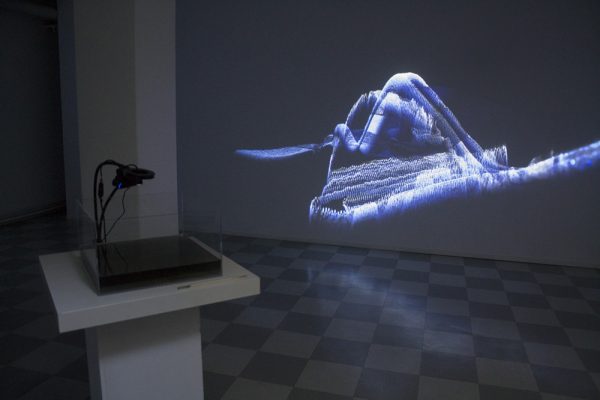 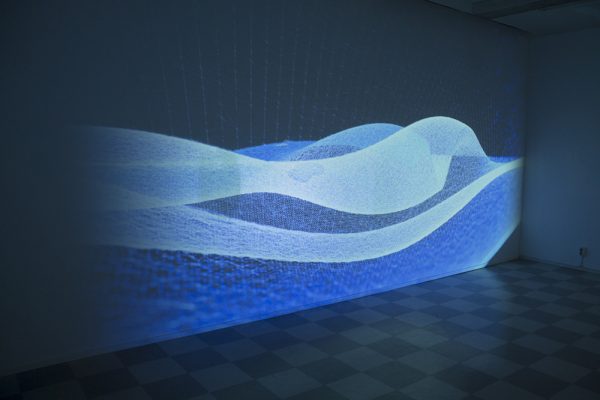 Fält & Fusco explores a field touching on science by aspects of their methodologies – the field research, the (limited) chemistry involved, the experimental processes, the computerized processing of information. At the same time, they embed a specific non-discursive, non-rational aspect to their work. They are on a path towards something truly interesting.

Waves, patterns, I listen to the waves from my window now, endlessly shaping, amassing, crushing, dissolving. I read the wind, touch a crack on the wall; unspoken, unheard. Facts, no fiction, thoughts yet not formed but still amassing, crushing, dissolving. Waves pass my body, sounds carry through it. I am a crack in the atmosphere. I am, but only now.