It all looks pretty minimalist, these op-art-resembling, hard-edge-looking works behind their curved acrylic fronts. While you move across the room, the colours of the vertical stripes shiver and transform, a bit like those plastic covered postcards of a blinking Jesus that we don’t see much anymore. But there is more to this than meets the eye.

The appearance of Jonna Suurhasko’s new works is high-tech and cool, like they had never been anywhere near a human hand. So much more surprising to learn that they are woodblock prints, carved with slow and meticulous precision. The works represent an exploration not only of colours and optics, which is evident the moment you enter the modernist cubicle of Ars Libera in Kuopio. They explore a process of making, that at first seems to contradict the neutral, cool appearance of the works.

The unseen is an aspect of visuality. What we know or what we learn extends our experience. Suurhasko’s process extends our perception into the manual making of the works. Once we’ve realized how they’re made, we make a u-turn together, and return to the appearance. The exhibition is titled “Interference”, a word rich in reference. The most immediate meaning is from physics, where waves of any sort (sound, light, radio waves, surface water and other more obscure wave phenomena) can interfere and affect each other. Here in Kuopio, the interference of water comes most immediately to me, the waves interacting on a lake on a quiet summer day, where a little breeze moves the waves one way, and are met by the wake of a boat or a stone dropped into the water. That kind of wave interference seems to be at hand when the coloured stripes of the works appear to waver by my slight movement past some of the works. Or is it the “thin film interference” you see when oil is dropped into the water, and a bright rainbow of colours appear on the surface? I assume this physical phenomenon is somehow at play in Suurhasko’s works.

The striped works on the ground floor are titled Bow, followed by a number (or with the prefix “mini”). This could refer to the bow-shape of the acrylic sheets in front of the colour prints, but also to the bow-shape representing a singular wave. Form and idea are strongly connected in these works.

I believe much more could be said from a physicist’s point of view, on the science in general behind interference and its role particularly within optics. My own safe turf is visual art, and my associations are moving in minimalist directions, to artists diametrically different like Ellsworth Kelly, Agnes Martin, Frank Stella and Victor Vasarely, or modernist explorers of colour and optics like Joseph Albers and László Moholy-Nagy. They all explored the most fundamental aspects of art. In an age when artistic research is emphasized, it is worth noting that works like these by Suurhasko equal basic research (Grundforschung), the slow and long-term laborious work where part of the point is advancing in minuscule and carefully weighed exploratory steps. 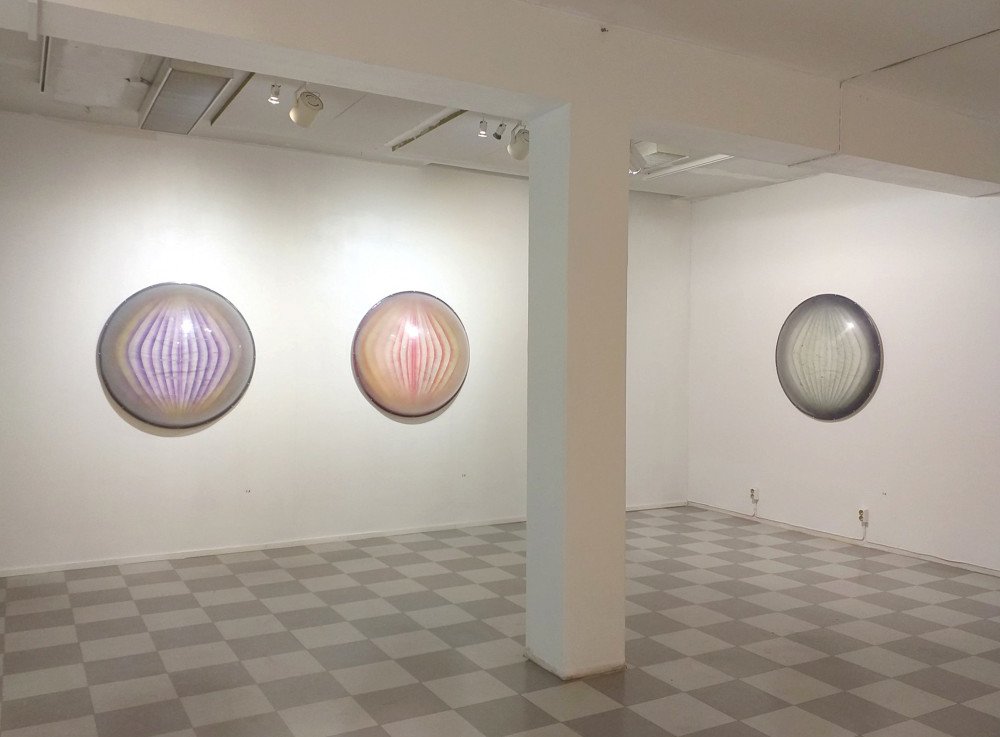 Stepping down to the basement you meet artworks from the same methodical vein, but formally different. Here are works from the series Optigrafia. The symmetrically angled shapes printed on the surfaces open up to the viewer much in the manner of the corner of a book. The circular prints are covered by plastic domes, the type of acrylic windows that were popular on roofs in the distant era of the 1970s and 80s. As some of the structures where these bulbous windows were used are being renovated or torn down, the acrylic elements have been salvaged by Suurhasko. This reuse or repurposing comes with a price or at least a history, as marks and scratches come along with the plastic domes. Just as much as I sympathize with the act of reusing these building elements, I can’t free myself from an annoyance at these imperfections covering the delicate print works. My conscience approves, while my aesthetic senses object. Maybe that too is a good thing.